The Best Deals of the Year Start Now!

$ 1,295 .00
No interest if paid in full within 18 months Learn more
Ships within 2 business days
Feel confident in your purchase with VK's industry leading warranty on used and vintage items. "VK Certified" means that your gear has gone through our rigorous multi-point inspection, servicing, and quality control process to ensure that it looks and sounds as close to factory new as possible.

High precision, dual-capsule, large-diaphragm condenser studio microphone, which can be used with or without modeling
Shop All Townsend Labs
Skip to the end of the images gallery 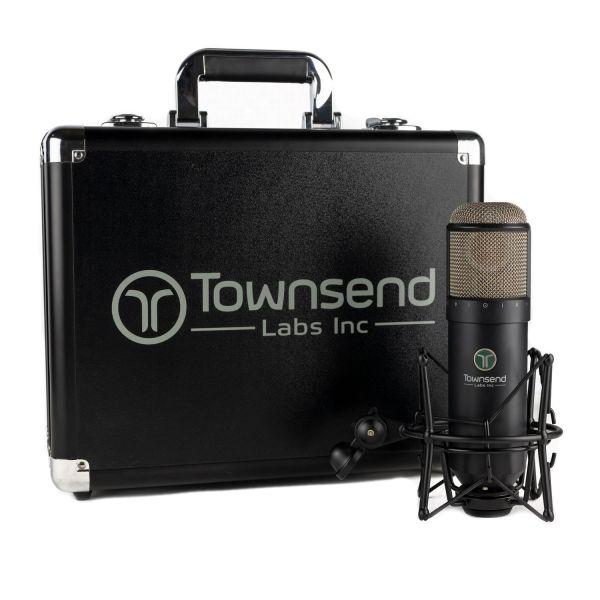 Skip to the beginning of the images gallery

The Townsend Labs Sphere L22 Condenser Studio Mic allows you to record with the sound of microphones many have only dreamt of! The Sphere L22 is a 3D precision microphone modeling system providing the characteristics of the most sought-after large-diaphragm condenser microphones with outstanding accuracy. The Sphere™ system consists of a high precision dual channel microphone, which, when paired with the included Sphere DSP plug-in (UAD, VST, AU, AAX Native), accurately models the response of a wide range of mics, including transient response, harmonics, proximity effect and three-dimensional polar response. With the DSP plugin you change the mic, polar pattern and other characteristics even after tracking!

Sphere’s three-dimensional approach captures the spatial nuances, proximity effect and off-axis frequency response of a wide range of microphones, which until now was not possible with any other product. The Sphere system employs the high-resolution, dual-channel L22 large-diaphragm condenser microphone, custom designed to capture the three-dimensional soundfield with exacting detail. Manufactured to extremely tight tolerances, the L22 ensures that modeling is consistent and accurate

Sphere – How It Works

Using a dual-capsule microphone with dual-outputs makes it possible to more completely capture the soundfield—including the directional and distance information otherwise lost with a conventional single-channel microphone. This allows the Sphere system to precisely reconstruct how different microphones respond to the soundfield. In contrast, other microphone modeling technologies apply EQ to filter the sound from what is essentially a conventional microphone. This is fundamentally no different from using EQ to process a recorded track. track. S

The Sphere L22 microphone modeling system comprises this precision dual-channel microphone, plus an audio plug-in for your DAW. The software plug-in does all of the DSP processing used to create the microphone models. Using a plug-in, instead of DSP processing built into the mic, has the major advantage of allowing the user to change all of the modeling settings, such as mic type and polar pattern, after the audio is recorded.

Sphere L22 Microphone – high precision, dual-capsule, large-diaphragm condenser studio microphone, which can be used with or without modeling.

No one has written a review yet. Be the first!

Please fill out the form below and a Vintage King Audio Consultant will contact you with a ship date for the Townsend Labs Sphere L22 #LAG0900 (Used).

Have a better price in mind for the Townsend Labs Sphere L22 #LAG0900 (Used) that you've been checking out? We're willing to work on it!Please fill out the form below with your contact information.Once the form is submitted, a Vintage King Audio Consultant will contact you as soon as possible with our best price on this product.

When it comes to getting the best gear, your tastes are probably pretty particular. Vintage King can help answer any and every question to help you make the right decisions for your sound. Fill out the form below and we'll be in contact with you shortly.

Free shipping to the lower 48 US states on orders $99 and up. See details.

I would like to thank VK for the wonderful sales assistance, service and prices. This was my first purchase with you and it won't be my last. I only wish I'd discovered you years ago!
Matthew R.
I had two Grammy wins this year - Ray LaMontagne & Carolina Chocolate Drops. Both made with help from Vintage King!
Ryan F.
In almost 20 years in Pro audio buying, never did I receive a unit so well packed and exactly as described. Works flawlessly. The whole process has been so smooth. I will never hesitate to do business with you guys in the future and will recommend you to everyone I know.
Martin C.
This was my first experience buying something from Vintage King (although I surf the "used" categories on the website frequently!), and, despite being on the other side of the world, I had absolutely no trouble and everything went very smoothly.
Phil T.
The speed of delivery exceeded my expectations! I was VERY pleased that my shipment arrived in time for a scheduled vocal tracking session. The packing insured that my order arrived safely. And the sales staff responded quickly to questions regarding the product.
James P.
Thank you so much! Vintage King has been so fair and easy to work with. I can't thank you enough. It feels good to trust such a hefty purchase to folks who are so helpful and knowledgeable. Vintage King is a sound designers dream store.
Noa L.
You guys have excellent customer service and I am excited about the next upgrade I complete on my fifth recording facility. I've been in the studio business for forty plus years. The salesman I worked with at Vintage King was the best of the best. You all rock!
Robby T.
I would recommend Vintage King to any one looking for top-class gear, unbeatable customer service and the best prices on the map!
Jake D.
My experience with Vintage King was excellent. The order was here fast considering it was out of stock. The sales person had SKB send it to me directly and I couldn't have been more pleased.
Michael D.
From the minute I placed my order I was kept well-informed through each step in your process. Even though I was buying a comparatively modest piece of gear, your attention to detail made me feel like I was purchasing a six-figure mixing desk.
Thomas W.
I am a new customer of yours. You guys provided me the absolute best deals in ordering all the equipment to power my brand new recording studio. Your customer service is amazing and i will always deal with you from here on out.
Rob M.
Thanks for your great service and getting this out today. You guys really are the Kings!
Alan B.
Better than expected! Truly impeccable service. Your team was professional, knowledgeable, provided speedy delivery above and beyond standard. Vintage King Audio is definitely my go to for all of my audio and information needs.
James O.

For assistance in better understanding the content of this page or any other page within this website, please call 888.653.1184 during normal business hours.