The Best Deals of the Year Start Now!

$ 1,795 .00
No interest if paid in full within 18 months Learn more
Ships within 2 business days
Feel confident in your purchase with VK's industry leading warranty on used and vintage items. "VK Certified" means that your gear has gone through our rigorous multi-point inspection, servicing, and quality control process to ensure that it looks and sounds as close to factory new as possible. 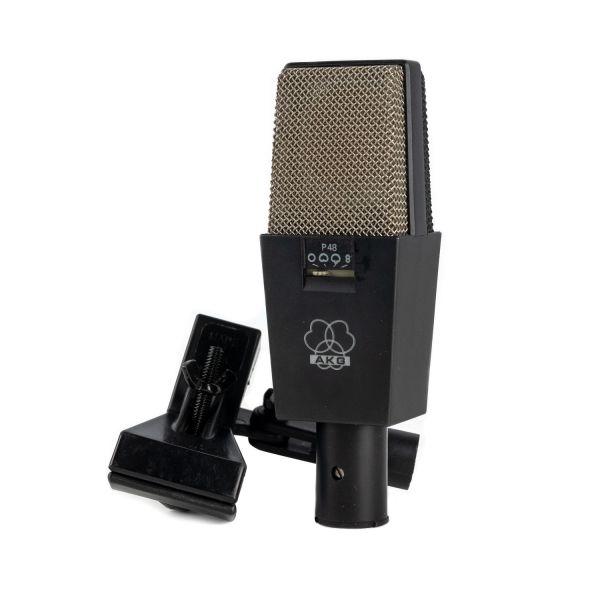 Skip to the beginning of the images gallery

Excellent all-purpose microphone that really shines on vocals and acoustic instruments, but works well on almost anything.

The AKG 414 Series of microphones continue a long tradition of excellence that starts with the legendary C12 tube mic, with its equally legendary CK 12 capsule able to produce nine polar patterns. The cylindrical C12 morphed into the smaller trapezoid shape of the C12A and C12B when the miniature Nuvistor tube was adopted. It morphed again into the C 412, the first of the FET designs, which had a choice of three polar patterns, and then into the C 414, which had four patterns.

The big change came in 1976 with the C 414 EB. The prior mics used a trapezoid-shaped adapter to provide a stand mount as well as cable output. The EB model was the first to use a built-in xlr output, thus taking on the iconic form that the 414 Series retains to this day. The other major change was the addition of switches for -20 dB pad, and bass rolloff. But the biggest change came during the middle of the production run of the EB model, when AKG discontinued making the elaborate and expensive CK 12 'brass ring' style edge-terminated capsule, and replaced it with a CK 12 that used a teflon ring to hold the membrane in place. With the change to the newer CK 12 capsule, the modern era of the 414 Series began.


From the original brochure:

"Although based in the lineage of famous AKG large diaphragm microphones - C 12, C 12A, C 12B, C412, and C414, and also on the same one-inch gold-sputtered dual-diaphragm capsule -the CK-12- the electronics of the new C 414EB are a completely new departure, and the key to the digital level performance of the microphone. The resulting technical specifications are unique among today's microphones and will remain in the forefront of even tomorrow's microphones. The equivalent noise level of the C 414EB is at the "hushed" level of 18 dB SPL (weighted per DIN 45 405) and 15 dB SPL (A-weighted noise level per DIN 45 634, IEC 179), figures heretofore unchallenged.

The C 414EB Microphone's maximum sound pressure capability equally outranges any other product available. For all polar patterns with zero attenuation and flat response (no rolloffl, the maximum sound pressure level at 1,000 Hz for 0.5% total harmonic distortion from the electronics ... is a resounding 142 dB. With maximum attenuation selected, the figure increases to 162 dB. This results in a working dynamic range of over 124 dB, and a signal-to-noise ratio re: 94 dB SPL per DIN 45 590 of 76 dB (re: 94 dB SPL per IEC 179/Aweighted of 79 dB).

Pre-attenuation is incorporated before the FET impedance converter stage to permit the increase of undistorted maximum sound pressure level by 10 or 20 dB for close-up recordings. This technique inhibits distortion in the transformers and circuitry used in the microphone's output and mixer inputs. A recessed switch on the front enables the user to select anyone of four different polar patterns to adjust for different recording situations.

Four different types of microphones are thus combined in only one C 414 EB. All polar patterns are virtually frequency independent to guarantee the same sound character for all angles of incidence.

The switchable bass-cut circuitry will reduce the risk of distortion at low frequencies. This feature is especially useful to combat wind noise and stage floor vibrations. The slope of the bass-cut filter is more than 12 dB/octave, the cut-off may be set to 75 Hz, 150 Hz, or may be bypassed (flat) ."

No one has written a review yet. Be the first!

Please fill out the form below and a Vintage King Audio Consultant will contact you with a ship date for the AKG C 414 EB Four-pattern Microphone #21398 (Vintage).

Have a better price in mind for the AKG C 414 EB Four-pattern Microphone #21398 (Vintage) that you've been checking out? We're willing to work on it!Please fill out the form below with your contact information.Once the form is submitted, a Vintage King Audio Consultant will contact you as soon as possible with our best price on this product.

When it comes to getting the best gear, your tastes are probably pretty particular. Vintage King can help answer any and every question to help you make the right decisions for your sound. Fill out the form below and we'll be in contact with you shortly.

Free shipping to the lower 48 US states on orders $99 and up. See details.

I would like to thank VK for the wonderful sales assistance, service and prices. This was my first purchase with you and it won't be my last. I only wish I'd discovered you years ago!
Matthew R.
I had two Grammy wins this year - Ray LaMontagne & Carolina Chocolate Drops. Both made with help from Vintage King!
Ryan F.
In almost 20 years in Pro audio buying, never did I receive a unit so well packed and exactly as described. Works flawlessly. The whole process has been so smooth. I will never hesitate to do business with you guys in the future and will recommend you to everyone I know.
Martin C.
This was my first experience buying something from Vintage King (although I surf the "used" categories on the website frequently!), and, despite being on the other side of the world, I had absolutely no trouble and everything went very smoothly.
Phil T.
The speed of delivery exceeded my expectations! I was VERY pleased that my shipment arrived in time for a scheduled vocal tracking session. The packing insured that my order arrived safely. And the sales staff responded quickly to questions regarding the product.
James P.
Thank you so much! Vintage King has been so fair and easy to work with. I can't thank you enough. It feels good to trust such a hefty purchase to folks who are so helpful and knowledgeable. Vintage King is a sound designers dream store.
Noa L.
You guys have excellent customer service and I am excited about the next upgrade I complete on my fifth recording facility. I've been in the studio business for forty plus years. The salesman I worked with at Vintage King was the best of the best. You all rock!
Robby T.
I would recommend Vintage King to any one looking for top-class gear, unbeatable customer service and the best prices on the map!
Jake D.
My experience with Vintage King was excellent. The order was here fast considering it was out of stock. The sales person had SKB send it to me directly and I couldn't have been more pleased.
Michael D.
From the minute I placed my order I was kept well-informed through each step in your process. Even though I was buying a comparatively modest piece of gear, your attention to detail made me feel like I was purchasing a six-figure mixing desk.
Thomas W.
I am a new customer of yours. You guys provided me the absolute best deals in ordering all the equipment to power my brand new recording studio. Your customer service is amazing and i will always deal with you from here on out.
Rob M.
Thanks for your great service and getting this out today. You guys really are the Kings!
Alan B.
Better than expected! Truly impeccable service. Your team was professional, knowledgeable, provided speedy delivery above and beyond standard. Vintage King Audio is definitely my go to for all of my audio and information needs.
James O.

For assistance in better understanding the content of this page or any other page within this website, please call 888.653.1184 during normal business hours.